Structure & function of the Vestibular System 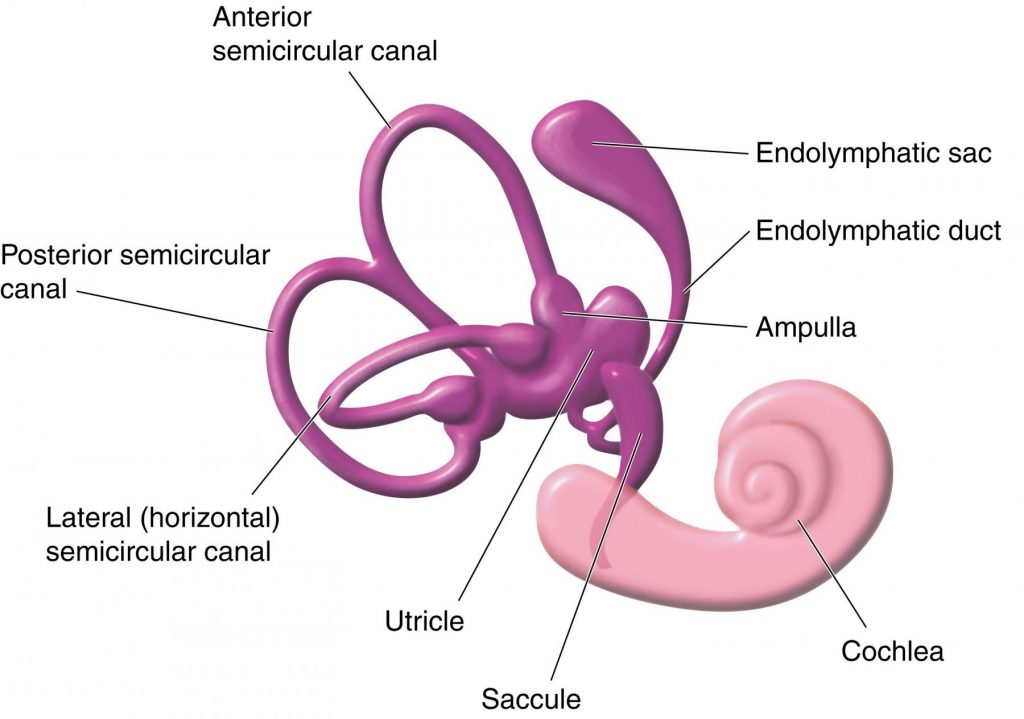 How does the balance system work?
The body’s balance system works through a constant process of position detection, feedback and adjustment using communication between the inner ear, eyes, muscles, joints and the brain.
Deep inside the ear, positioned just under the brain, is the inner ear. While one part of the inner ear enables hearing, another part, called the vestibular system, is designed to send information about the position of the head to the brain’s movement control centre, the cerebellum.

The brain’s movement control centre
The cerebellum is a small part of the brain positioned at the back of the head, where it meets the spine, which acts as the body’s movement and balance control centre. It receives messages about the body’s position from the inner ear, eyes, muscles and joints, and sends messages to the muscles to make any postural adjustments required to maintain balance. It also coordinates the timing and force of muscle movements initiated by other parts of the brain.
​
Position feedback from the inner ear
The vestibular system in each inner ear is made up of three semi-circular canals and two pockets, called the otolith organs, which together provide constant feedback to the cerebellum about head movement. 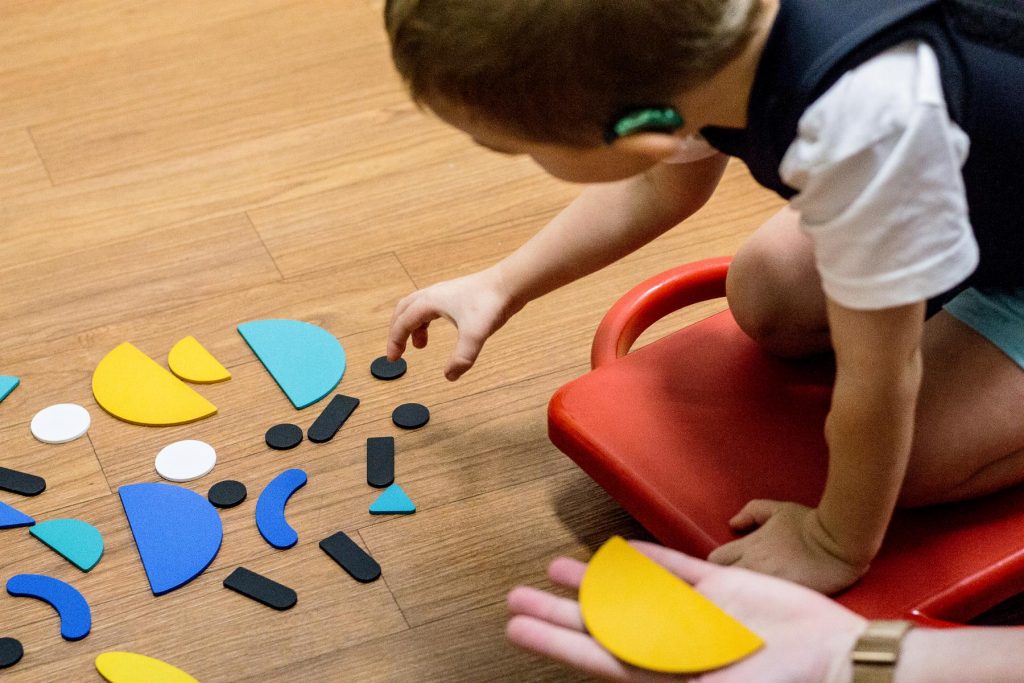 Each semi-circular canal has a different orientation to detect a variety of movements such as nodding or rotating. Movement of fluid inside the canals caused by head movement stimulates tiny hairs that send messages via the vestibular nerve to the cerebellum.
The two otolith organs (called the saccule and utricle) send messages to the brain about body movement in a straight line (backwards/forwards or upwards/downwards) and also about where the head is in relation to gravity, such as tilting, leaning or lying down. These organs contain small crystals that are displaced during these movements to stimulate tiny hairs, which transmit the message via the vestibular, or balance nerve to the cerebellum.

Position feedback from eyes, skin, muscles and joints
The vestibular system (inner ear balance mechanism) works with the visual system (eyes and the muscles and parts of the brain that work together to let us ‘see’) to stop objects blurring when the head moves. It also helps us maintain awareness of positioning when, for example, walking, running or riding in a vehicle. In addition, sensors in the skin, joints and muscles provide information to the brain on movement, the position of parts of the body in relation to each other, and the position of the body in relation to the environment. Using this feedback, the brain sends messages to instruct muscles to move and make the adjustments to body position that will maintain balance and coordination.

If any of these systems isn’t working right, it can affect balance.

Reprinted with permission from Royal Victorian Eye and Ear Hospital. How the Vestibular System is tested

The vestibular and visual systems are connected to each other and to the muscles in the eyes and neck that help maintain good balance. Head movements or other stimulation of the inner ear sends signals through the nervous system to control eye muscle movements. This system is designed to generate eye movements that maintain clear vision when the head is in motion. Many vestibular tests use equipment to monitor the eyes for normal and abnormal movements when the vestibular system is stimulated.  Although testing the vestibular system in children can be difficult, some tests can be used on children providing they are conducted by specialists who have been trained to modify the equipment and techniques accordingly.

Management of the Vestibular System

Children with vestibular dysfunction will often have delayed motor milestones. They may demonstrate poor head control, delayed independent sitting, and/or delayed walking. The child may appear clumsy and more prone to falls or injury. With the right therapy, the everyday impact can be minimised.
​
​Vestibular rehabilitation therapy (VRT) – is an exercise-based program run by specialist Vestibular Physiotherapists and is designed to promote central nervous system compensation for inner ear deficits. VRT exercises should be personalised based on a child’s age, interests, level of comprehension, and test results. The exercises may help strengthen balance skills and coordination. Exercises might involve things like bending down, standing or walking with eyes open and then with eyes closed, swimming, or walking barefoot on various uneven surfaces.

Children typically respond more quickly to VRT than adults, because of their greater neuroplasticity—the ability of their neurological systems to more quickly compensate for and adapt to vestibular deficits. In addition, children tend to be less fearful of movement than adults, so they participate well in the balance and movement aspects of therapy.

The below resource has been produced by ACFOS (acronym in French for Action, Knowledge, and Training for Deafness) and provides excellent information on the vestibular system in children. 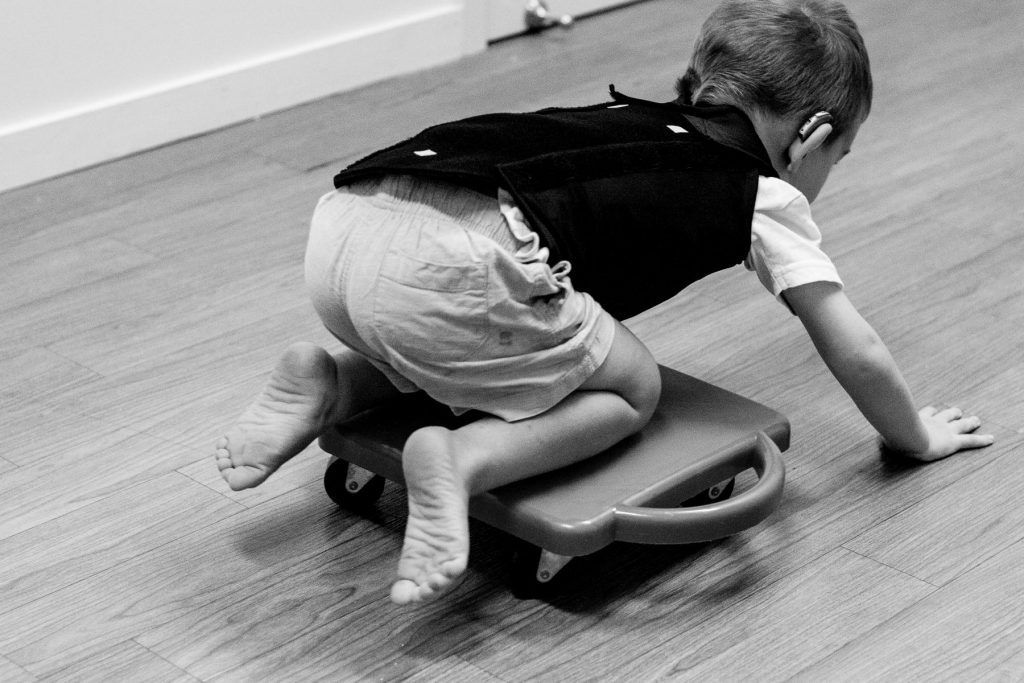 Menu
© 2022 UsherKids Australia
Website made with ❤ by Stoke Design Co